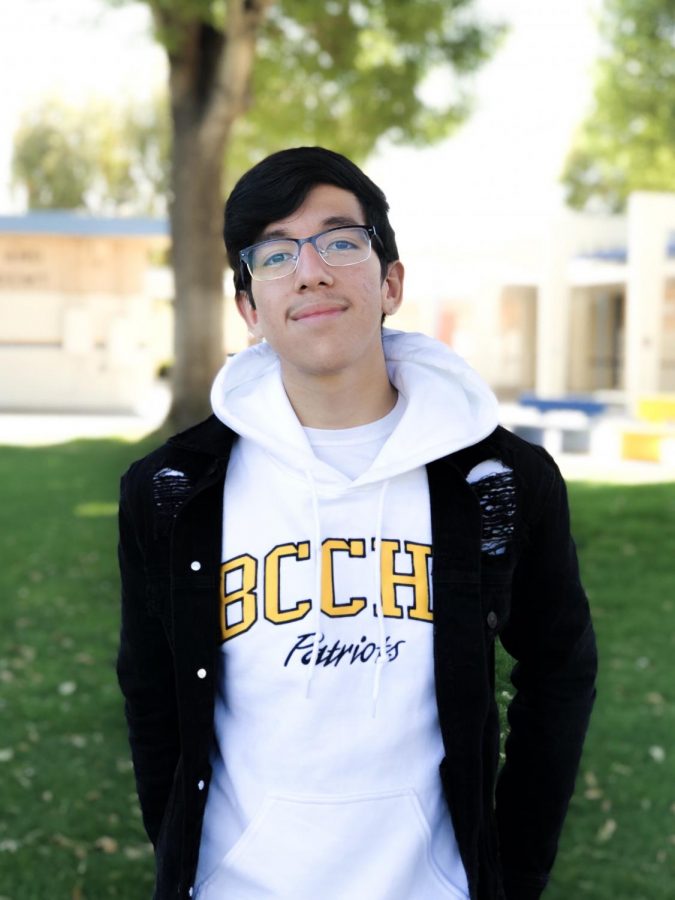 Here comes a time for us again to say our goodbyes. Nothing is more bittersweet than to say farewell to our seniors this year. One of them is our 2017-18 student body president, Leslie Hernandez. The Associated Student Body is heartbroken to see her and her fellow seniors leave, but the veterans are also excited for their new leader. Patriots, let me introduce to you your next ASB President for the 2018-19 school year, Josh Castro! Now let’s take a deep dive and get to know our future president.

First thing you need to know about Josh is… he loves dogs, a cycle that seems to be happening with our previous ASB presidents.  So of course he has one of his own. “Shadow” is a shih tzu and poodle mix, and Josh feels that he’s really adorable. I think like we can all agree that all dogs are adorable and so is “Shadow.” 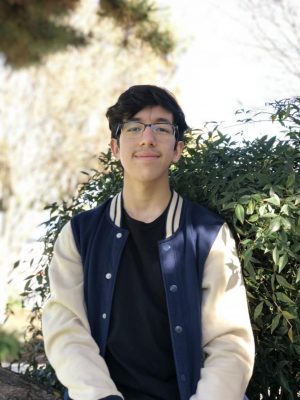 However, what you should truly know about Josh first is why he wanted to be run for president. Josh explained that “I wanted to create an environment that was fun, safe, and unites students.” He added, “I want our students to learn and grow throughout high school, because it just gets harder after.”

Although Josh revealed that his desire to run wasn’t really clear at first, it all changed towards the beginning of spring semester. His ambition is for the student population to achieve their goals, in whatever shape or form they take, while having the best high school experience.

Something you must know as well, is that he loves to spread positivity. He loves to do this by smiling and greeting people, because “something simple as saying ‘hi!’ can make someone’s day.” He is also a great photographer. He isn’t too keen to brag about it, but his photography account on Instagram speaks for his talent. His knowledge and his camera skills come from being a part of the Yearbook staff since his sophomore year. Not only is he the sports lead editor for yearbook, he is also co-president of CAL Senate and a member of the Cheer Team. Which is another personally bittersweet moment, because Josh will have to leave Cheer to be devoted to ASB and other commitments.

Becoming president of the student body comes with leadership responsibilities and compassion for our students in high school. Once he is president, he will have to balance his own academic performance as well and among other extra-curricular activities. With cheer being a competitive and arduous sport, he has to make adjustments to fulfill all his duties. Josh expressed that his journey with cheer has come to a sad ending. Being a part of the team for three and a half years has led him to making “many new friends and memories that will last him for a lifetime”. He is also proud that cheer won first division for the city championship, which is a big win for Birmingham as well. He is happy they have “potential for a better season” next year and that he will be leaving on a good note. 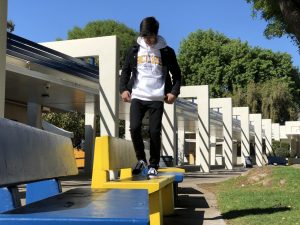 Josh CastroASB President Josh is shown in an off guard pose, while wearing his BCCHS school hoodie.

Josh’s success couldn’t have happened without a good campaign and the best support system. He decided that he would adopt our school colors for the his advertisement. “I decided to choose this color scheme because my intentions were to represent our school as a whole,” Josh explains.

His slogan was, “The Voice For You,” and he added that, “If I were elected ASB president, I would like nothing more than to voice the concerns of our school.” Additional strategies used were: flyers, T-shirts, stickers, and a Snapchat Geo filter–which was never done before in campaign history. The filter was original and unique, and probably helped him in many ways because of Snapchat’s wide popularity. 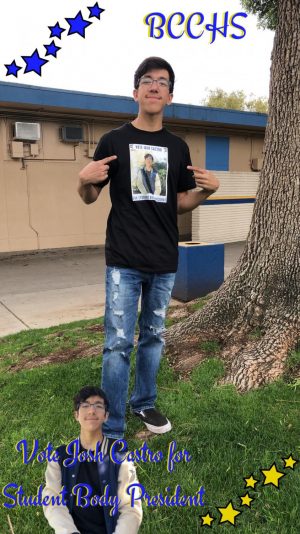 The Snapchat filter Josh used for his campaign, along with the campaign shirt as well.

Let’s not forget the people who were there for Josh since the start, specifically his mom. He explained, “Every day she asked me about it, from Monday to Friday. She’d ask me, ‘oh, how was campaigning today?’ Josh thanked his mom for her constant support for him, and he knew no matter what the outcome was, she would still support and be there for him either way. His little brother Jimmy, who will be a freshman this coming fall, was super-excited as well. He told his friends how his older brother will be president of the student body of his school. His older brother, Jeffrey, also a former student, expressed his encouragement and support for his little brother as well. So in his own words, Josh would like to say, “The support of my family is life’s greatest blessing.”

Lastly, Josh has a message for his other supporters as well. He expressed, “I genuinely appreciate every single individual who supported and will continue with me in my journey as president. I would not be here in this position without you, so again thank you very much!”

For the rest of Birmingham as well, Josh has some advice: “Patriots! Prepare for the 2018-2019 school year, and you’ll be in for an unforgettable and amazing school year! It’s time to create a fun, safe, and united environment for us all.”

For those who are expecting for Josh to reveal any top secret events for the upcoming year, he said we’ll just have to wait and see. Yes we will as we are all going to be surprised about what lies ahead in our next school year. I’m pretty sure it will be better than we’re all expecting.

Once again, farewell and good luck to Leslie, and welcome Josh!