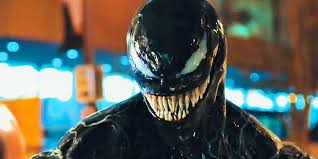 Venom smiling as his movie claims the top spot at the box office.

Venom, the Marvel movie starring Tom Hardy, hit theaters this past October 5th, 2018. This writer went to go watch Venom over the weekend, and  it was a really enjoyable and action-packed movie. Tom Hardy really acts as if he is a realistic Eddie Brock during the whole movie. The CGI wasn’t perfect, but it was still amazing as we saw Venom appear on screen for a full body shot. The fight scenes in the movie were absolutely stunning, especially the final fight between Venom and the main villain, Riot. Riot is another symbiote just like Venom, but unlike him, Riot wants to bring more symbiotes to earth to conquer and devour the planet. Venom’s main goal is to stop that from happening. Throughout the movie we get to see how Venom became a “Lethal Protector.” The movie runs for two hours and 20 minutes and also consists of two end-credit scenes, one which Marvel fans must have found very intriguing.

The movie itself was great and it was not dark and gritty like everyone expected; however, it was a fun and action- packed movie. Critics like Rotten Tomatoes may have given the movie a low rating, but a great majority of audiences who have seen the movie (just about everybody) loves the movie and how Tom

Hardy brings both Eddie Brock and Venom to life on the big screen. Venom doesn’t show up immediately but he shows up almost halfway throughout the movie in a full body shot. Before that we see how the symbiote interacts with Eddie and how it affects his body and mind. We also get to see a few easter eggs in the movie from characters who are in Marvel comics.  The main villain was interesting. Everyone thought the symbiote, Carnage, was going to be the big bad villain for the movie, but it was actually none other than the symbiote, Riot, another one of Venom’s offspring from the comics. In the comics, Riot is bonded with a Life Foundation security officer, but in the movie, Riot is bonded with Carlton Drake, owner of the Life Foundation.

One interesting thing that Sony did not put in the movie was Spider-man.  Although this may seem like a bad decision at first, it still works, since the only abilities Venom gets from Spider-man is wall crawling, web swinging, and the famous spider logo. Venom can still go up walls just not as smoothly as Spider-man.

Other than Venom’s main foe not being in the movie, watching it was still a blast. Especially the chemistry that we see between Eddie and Venom, just like in the comics. Another easter egg was J. Jonah Jameson’s son, who is just referred to as Jameson. We see that just like in the comics and the Spiderman animated series from 1994, Jameson was on the ship that crashed and brought the symbiotes to earth. The last easter egg that I will talk about is She-Venom, who had a small amount of screen time in the movie. Anne Weying (played by Michelle Williams) takes on the Venom symbiote for a brief amount of time to save Eddie, and then returns the symbiote through a kiss–which was interesting.

Before mentioning end-credits, be warned there are spoilers ahead, so if you haven’t seen the movie, I recommend watching it first before reading on. Anyway, the first end-credit scene consists of Eddie Brock meeting and interviewing Cletus Kasady (the host of the Carnage symbiote) as well as watching him write on the wall of his cell with blood. Near the end-credits, Kasady says the following, “When I get out, and I will, there will be carnage.” This basically guarantees him being the main villain for the Venom sequel.

The second end-credit scene was odd, yet interesting, showing us a whole scene from Sony’s next Marvel film, Spider-Man: Into the Spider-Verse. The scene starts off with Miles Morales (the main protagonist) running away from the villain known as The Prowler. After it shows Miles running into another version of Peter Parker from another universe, who he accidentally knocks out, he uses Parker’s web shooters (attached his knocked-out body’s wrist) to flee from the police who try to arrest him for a criminal carrying a body.

Venom crawled into theaters October 5th.  Make sure to catch this symbiotic creature at your local theater as soon as you can.