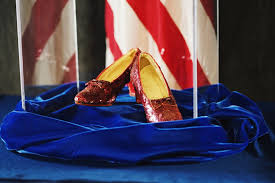 A pair of red ruby slippers being displayed at the museum.

The famous ruby red slippers have finally returned back home. One of the four pairs that Judy Garland wore on the movie The Wizard of Oz  were stolen from the museum in Minnesota that they were being stored in. At the time of their disappearance, the shoes were worth about $1 million, but now about 13 years later, they are worth much more. It took so long to return the slippers back home because of all the misleading tips and the fact that the robber did a really great job at not leaving any traces. In fact, the only evidence of the robbery was a sequin on the floor that fell off a shoe. There were many theories about what had happened to the shoes, with one being that someone had thrown the shoes into a nearby lake. To authenticate the theory, the museum teamed up with the Itasca County Sheriff’s Dive Team, and during the 40th Annual Wizard of Oz Festival, divers scoured the depths of the Tioga Mine Pit lake but came up empty-handed.” Over the

course of the years, many other tips were sent to the officials but they all led to dead ends. It wasn’t until the summer of 2017 that a successful tip came in.

Ever since the year 1939, the red ruby slippers have symbolized something special to many people. The slippers represent the feeling of home. In the movie The Wizard of Oz, with the help of the famous red slippers, Dorothy returns back to her home in Kansas. It makes sense that watching The Wizard of Oz reminds us of home because the movie takes us on the journey of a young girl trying to get back home.

Along with reminding us of home, The Wizard of Oz teaches us many life lessons such as: never giving up, having courage, facing your fears, and that you can accomplish anything.

To begin with, we know that Dorothy’s goal was to get back home after a tornado blew her all the way to Oz. Her journey was made difficult by the Wicked Witch of the West who sent flying monkeys after her. Regardless off all the obstacles, Dorothy never gave up and found a way to get home. Secondly, the Cowardly Lion is very courageous when he puts his fears to the side in order to help his friends. For example, while on their journey, the group of friends starts to get attacked by vicious beasts and the Cowardly Lion makes sure that all of his friends are behind him so that he could protect them although he is scared. Thirdly, the movie gives many examples about how anything can be accomplished because the Scarecrow gained a brain, the Tin Man got a heart, and the Lion became brave. It turned out to be that they all had already acquired the traits they desired, but needed to do a little bit of self-evaluation and they didn’t end up needing to ask the wizard for anything. In conclusion, many life lessons can be learned from this.

In conclusion,  a pair of red ruby slippers that were used by Judy Garland in the movie The Wizard of Oz have been rescued and the movie teaches many different life lessons.  Hopefully, the thief is caught very soon so that this whole situation can be put to the rest and many generations of people can continue to enjoy watching The Wizard of Oz, and, of course, those famous ruby red slippers!