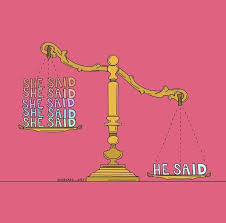 It’s okay to want to shave. Sure, it’s true that men shave more often than women, and it feels self-assuring to be fresh every now and then. There are many varieties of razors to choose from, so maybe you picked Gillette. Hypothetically, you shave your legs and your face, feeling good about what you just did.

Then pop goes the television showing us a commercial about men. This commercial brings controversy, which could bring about a possible cultural change in this country, or I don’t know… the commercial asks several questions all pointing to the same topic: toxic masculinity.

Yes, this term is actually real but this term isn’t new though. Ever since the late 1970s, the term “testosterone poisoning” was used by Alan Alda, who considered himself a feminist as he created and starred in the television series M.A.S.H. The point being, what he described about testosterone poisoning was: immense competitiveness, the obsession of measurement, and the casual compare-and-contrast of women. Now this behavior is just rude and awful, but this description was acknowledged to be biological, something you can do nothing about, as toxic masculinity was revealed to be mostly a cultural status quo. Those two definitions really matter, since you have to figure a situation based on how the behavior is seen. This debate on human behavior could bounce back to the Nature vs. Nurture theory; regardless, toxic masculinity is, and has always been, a matter of how male behavior is reflected about how we view the perfect “man.”

The Gillette Super Bowl commercial was mostly right: this stereotype of “being a man” is a lot worse than one could imagine. This stereotype paints men to be in control (that not being the best or winning makes you a loser) and that vulnerability makes you a weak, or a sissy. The main idea is that maybe more thought should be put into how we view others in general.

Moreover, the real issue here lies in the results of these behaviors. The root of psychological aggression, sexual assault, domestic violence, mass shootings and worse ALL relate to these behaviors considered “masculine.” For instance: not going to your doctor for your yearly visit; drinking heavily; driving too fast and carelessly; assuming responsibility for others’ problems; simplifying your life by conjuring everything as a claim of value (being right or wrong–and never another option); giving less empathy to others who care about you; the need to feel strong and important; policing other men for being “different” (thus reinforcing the masculine stereotype); and so much more.

This is what the Gillette commercial was exposing, and is that really arguable? If that’s what guys believe to be masculine–if that’s how ultimately fragile we men have created ourselves to be – then why wouldn’t you want to abandon that?

Weird, isn’t it? Weird how guys were subconsciously being told to demonstrate their alleged masculinity in fraternities, relationships, politics, in the military, and all the time? Sheesh, being a guy really stinks in this day and age. There isn’t an easy fix to this cultural problem, and frankly there’s a good chance that any guy reading this wouldn’t really consider taking a look at himself and asking: “Is my own masculinity based on who I am or what I do?”

This journalist has another idea: change the definition of masculinity and keep that idea open-ended. Being a man could mean anything and also nothing– whether it’s being a bartender, a football player, a nurse, an activist, or literally anything.  It probably should also mean that you treat everyone fairly, take care of yourself, examine your own behavior, allow other guys’ emotional support/leeway, and not leave anyone out. Parents are the most influential for this idea because they really shape the future generation. After all, it matters what they want them to be.