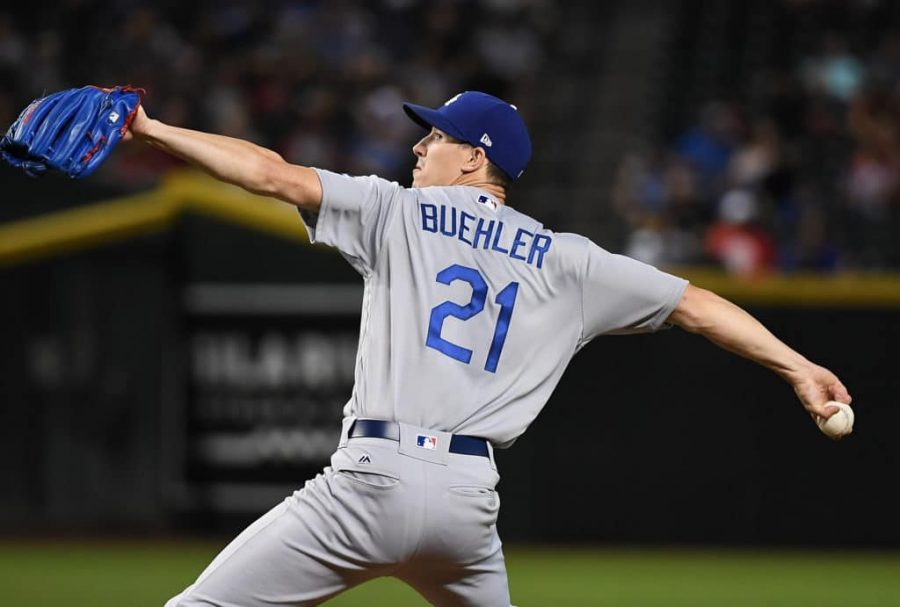 Walker Buehler for the Dodgers.

Wait for it. Trust me, just keep reading. All of this is totally unrelated to the rest of the text so just keep reading. Wait. Just keep waiting. Give the story a few more seconds… hold on…. not yet… It’s TIME FOR DODGER BASEBALL!

The Dodgers again return to the baseball field in Los Angeles for exactly the 61st time since they started at the Los Angeles Memorial Coliseum in 1957. Now in 2019, the Dodgers start their season with quite a few new additions to the team. The most notable acquisitions, personally speaking, were Joe Kelly from the Boston Red Sox who’ll do his best to bring the bullpen some bite, and center fielder A.J. Pollock from the Arizona Diamondbacks who’s done a lot of damage to the Dodgers in the past. Corey Seager, Walker Buehler, and Julio Urias (among others) are set to make the Opening Day roster, though unfortunately, Clayton Kershaw did not make the Opening Day start and began the season on the disabled list, ending the streak of eight Opening Day starts for the Dodgers. 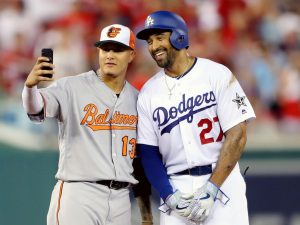 A really weird moment during last year’s All Star game in 2018.

During the offseason, Yasmani Grandal signed himself a one-year $18.25 million deal with the Milwaukee Brewers while Hyun-Jin Ryu resigned with the Dodgers on a one-year $17.9 million deal, and Manny Machado was not re-signed to the Dodgers and the San Diego Padres offered him a ten-year, $300 million dollar contract. The Dodgers even resigned Dave Roberts to an extended 4-year contract with the team.  But Los Angeles traded away Yasiel Puig, Matt Kemp, and Alex Wood to the Cincinnati Reds, while getting Homer Bailey and three more prospects. The Dodgers also made some minor league moves over the break, acquiring Brad Miller from the Tampa Bay Rays, re-assigning Josh Fields to Triple-A ball, though there were a few more moves that weren’t recorded.

The Bryce Harper Conundrum is over. Many teams were excited when Bryce Harper finally became a free agent after the 2018 season, including the Dodgers. During the offseason, though, the craze started to fade away; consequently, deals from teams with big dollar signs also started to fade away. Any sports fan could arguably agree that Harper wasn’t the best player out there; Bryce was going into a slump during his last year with Washington with a batting average going below .200 . What’s more is that teams that he was considering had to apparently give big sums of money, and that actually personally feels a bit selfish: just another athlete doing the job for the money. The Philadelphia Phillies ultimately signed Harper on a 13-year, $330 million dollar contract, and the Phillies are in the process of rebuilding their team. This journalist still thinks that the Dodgers can beat Philly, Harper or not.

It must be a bit frustrating to be a Dodgers fan. The Dodgers may be 6-time back-to-back NL West Division Champions, and yet in the past back-to-back World Series appearances, the Dodgers haven’t been able to take it home. In our first back-to-back World Series appearance, I completely blame Dave Roberts for being just too conservative with his roster and putting Yu Darvish on the mound for Game 7 against the Houston Astros. In our second, I think that the Boston Red Sox were actually just more together in their game, what with just better players in general. Los Angeles didn’t stand a chance. The bullpen may be troubling, since there’s still not enough bite in our supply-just saying, the Boston Red Sox closer Craig Kimbrel is still for the time being unsigned and ready to pitch for any team but preferably the Dodgers.

The Los Angeles Dodgers have quite an optimistic view of the season ahead of them. Los Angeles has everything and nothing to prove after two World Series appearances, but nonetheless, they’ll have an interesting season to play in the coming months. This journalist seriously thinks that the Dodgers have a solid chance to win the World Series; besides, it’ll still be better than watching the Lakers or Clippers play. I’ll admit, after this year’s Super Bowl run, that the Rams are worth looking at in future seasons, but not until then. The Dodgers started playing on March 28, 2019.