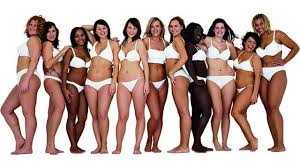 The standards of which a woman's body are supposed to look like have changed rapidly through time.

“Beauty is in the eye of the beholder”. This quote has been preached for years upon years, yet the real history of beauty proves otherwise. With beauty trends always changing and being reinvented, the idea of what is beautiful was something many women struggled to achieve–even if it meant jeopardizing their health. 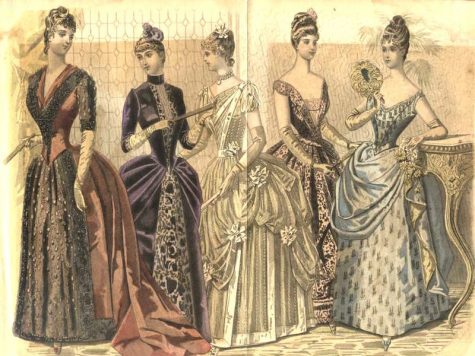 This portrait shows body and beauty standards of women in the Victorian era.

In the primitive discoveries of art, there were already symbols of the idealized woman. Further back 40,000 years ago, works of art portrayed the best woman as “well-nourished”. This is because women were expected to have their bodies prepared for childbirth and larger bodies were seen as a necessity for survival. In the Renaissance era, depictions of women transitioned from being basic objects of fertility to becoming objects of lust and beauty. They continued to be curvy, but were now depicted in art with soft faces.

Later on, in the Victorian and post French revolutionary eras, being weak and frail was considered to be ‘the look’, so long as you weren’t too strong. In addition, women opted to wear makeup despite it being straight up poisonous – the common ingredients of makeup at this time were lead, ammonia and mercury. The Victorians weren’t unaware of this either, and they would sadly risk poisoning themselves in order to look more beautiful. 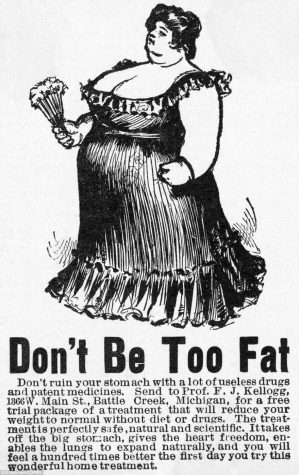 The 1920s brought the beginnings of modern obsessions with weight.

In the past 100 years, depictions have changed much more rapidly.  In the 1920s, women in America felt liberated since being able to join the work force after World War 1 and gaining the right to vote. This new age of fashion, the ‘flapper’ movement, transformed the old views of women. For the first time, the fertile, curvy look was no longer in. Feeling a sense of independence, women cut their hair to shorter lengths and wanted to be thin with no curves. Skirt hemlines were hiked up higher than ever before, allowing for women to move, dance and finally have some fun.

The downside to this era was the beginning of the modern obsession with weight. Prior to this decade, it had been impossible to weigh yourself and purchase a full-length mirror unless you were wealthy. Thus, with the invention of bathroom scales and the rise of department stores, working class women could see whether or not they were thin. They were now capable of picking apart their ‘flaws’. 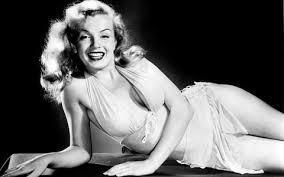 Marilyn Monroe is a symbol of beauty and glamour. She was popularized in the 1950’s.

The 1920’s ended badly and the Great Depression made worrying about your beauty the last thing on people’s minds. The majority of women were no longer capable of worrying about what clothes to wear or whether they were skinny enough. However, when the Great Depression ended and World War II came and went, the 1950’s arrived. As men returned home and most women retreated from the factories, there was a return to pre-war conservative values and Americans were in the mood to celebrate and indulge.

It was during this time period in which the Hollywood film industry was booming and made stars out of Marilyn Monroe and Grace Kelly, who became idolized due to their beauty and hourglass figure. This look became prized throughout the 50’s and 60’s. Many people believe that the famous models of the 50’s and early 60’s would be considered plus-sized today, however this is untrue. The idolized girls of this decade had a BMI (body mass index) between 18.8 and 20.5, which is lower than the average girl’s BMI of 23.6. This means that despite models in this era being just a little bit bigger, they were still smaller than the average female of today.

Kate Moss (pictured above) is one of the most influential models of the 1990s who once said “nothing tastes as good as skinny feels.”

When the 1960’s came around, there was a cultural shift. While young people began rebelling against the constrictions of the prior decade, most people became less satisfied with just having a house and car. From this decade onward, thinness was simply an expectation. The women’s liberation of the 70s allowed greater freedom for women, who despite progress, were still expected to be petite. The 1980s brought the beginning of the supermodel era, which is the result of women depending more on models for beauty trends rather than actors. This decade expected for women to be tall, tan, and somewhat athletic all while having small hips. The 90’s showcased the thinnest ideal female body type in comparison to the decades preceding it, with this eras famous supermodel Kate Moss being known to have a BMI of 16.

Despite the ever-changing concept of beauty, and most women’s struggle to fit into society’s perception of beautiful, the truth is there is no perfect body. Just like in older decades, influences such as media outlets and social media will always push a certain look or message of beauty. The ideal of self-acceptance is heavily over-looked, but it’s real message should be spoken, especially by those who need to hear it the most.

Rather then telling us everyone sees beauty one way, the message should be that no body is perfect. Everyone has flaws and the flaws that set us apart are what makes everyone beautiful in their own way.