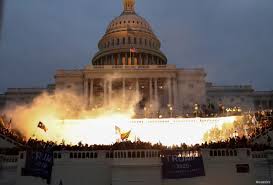 The Capitol Building during the deadly riot on January 6, 2021.

On January 6, 2021, the world watched American citizens attempt to overtake the United States Capitol Building in an act of domestic terrorism. This act of insurrection resulted in the deaths of five people and many injuries. The mob was encouraged to do so by the former president himself, Donald Trump. In the days that followed, more and more horrific details were released, along with a plethora of photos and videos to accompany them.

Before the attempted insurrection took place, Trump’s “cult members,” a phrase used to note Trump supporters’ unnatural obsession with him and his presidency, spent a lot of time planning their attack. This raises questions as to how the FBI, and other law enforcement establishments, claim they knew nothing of the sort. Seemingly, as an answer to this question, are the number of government insiders who took part in the riot, with some police officers, who were there to stop the riot, being seen opening doors and taking selfies with the supporters.

Ali Alexander, organizer of “Stop the Steal” and former Council for National Policy member, tweeted “everyone can guess what I and 500,000 others will do to that building.” Alexander and many others were very open about having “something big” planned for January 6th. But no amount of tweets could have prepared Americans for the horrors and humiliation that would take place on Capitol Hill.

In an attempt to overturn an election, one that had been proven to have no mass fraud multiple times, former President Donald Trump encouraged and promoted violence. A violent mob of Trump supports attempted to overtake the Capitol, and many had the intent to kidnap and/or kill certain politicians, including House Speaker Nancy Pelosi and former Vice President Mike Pence. The building had windows smashed out, nameplates ripped off walls, confidential mail stolen, and all this was clearly

documented on videos taken by the terrorist themselves.

In some of the videos taken, the rioters can be heard chanting, “this is our house,” along with many other threatening phrases, including asking where former Vice President Pence was, which later turned out to be an attempt to assassinate him.

Richard Barnett is one of the many names that became widely known after the attempted coup (a sudden, violent, and illegal seizure of power from a standing government) on the Capitol. Barnett was documented sitting in House Speaker Nancy Pelosi’s chair, with his legs kicked up on the desk. He claimed that because he pays taxes, it’s his chair and that he could “kick back and get comfortable” in the chair. He also left Pelosi a note on her desk, stating “we will not back down.” He left the building with some of Pelosi’s mail.

Another item stolen from House Speaker Nancy Pelosi was her laptop. The laptop was shown being stolen in the videos of the riot. After seeing these videos, Riley Williams was accused of stealing the laptop with the intent of selling it to Russian intelligence. Her lawyer, AJ Kramer, stated during her hearing that “in the allegation of the theft of the computer, she’s charged with aiding and abetting, not the actual theft itself.” In fact, [law enforcement] searched everywhere, and she did not have the computer. They searched her car and her house.” Williams continues to deny stealing the laptop.

One rioter, who’s being called “Elizabeth from Knoxville,” is being mocked all over the internet after a video of her complaining to Yahoo News after being maced for storming the capitol was released. In the video, she claims what she was doing was a “revolution” after being asked why she entered the Capitol building. Many accused her of holding an onion to make herself cry, but no credible sources have confirmed the theory.

Besides these people, many rioters were identified to the authorities by family and friends. As information was released, it became clear that the narrative of these people only being ignorant and under-educated people was false. Many of these people were educated and held good jobs, from lawyers to teachers, and it was clear people needed to realize who was there.

So many had believed that most of the Trump supporters rioting were ignorant and had no influence on the general public, but as people were being exposed, it became apparent that the people storming the Capitol weren’t just a bunch of ‘rednecks’ but working citizens who are teaching children, and managing people’s finances and so much more.

After this act of domestic terrorism, people called for the removal of Trump from office immediately. In the aftermath of the attack, talk of invoking the 25th Amendment was going around, but former VP Pence said he would not agree to do so. Soon enough, the articles of Impeachment were written and the House of Representatives impeached Trump for a second time, this time for inciting violence. The Senate is about to conduct a  trial to decide to convict Trump or not. It is still unclear whether or not he will be convicted by the U.S. Senate.