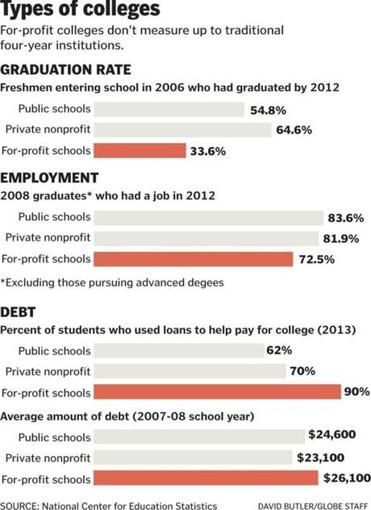 For high school students, especially seniors, finding a school to attend after they graduate is hard to do, especially with so many options out there. One option that they could look into is for-profit colleges. Mrs. Kronstadt is probably the most knowledgeable person on the BCCHS campus about colleges and higher education.

She was then asked , what is a for-profit school?  She answered that a for-profit school is an organization that calls itself a school. To her, it is more of a business interested in money rather than educating the people that enroll into their programs.

It can be speculated that not many students do too much research when it comes to choosing a school to apply to, so how do students know what colleges to look out for? One “no-brainer” way to find out which schools are for-profit, is the internet. Another form of information gathering  would be college catalogs. Mrs. Kronstadt has a catalog readily available for students to looks through in the college center. In the college catalog, it clearly states whether they are For-Profit schools or not.

These colleges often entice students with short programs –  which are sometimes also offered in community colleges – little to no debt, and easy  job hunting after they are done with the program. They promise students that their job after the program will allow them to earn a lot of money, where they will be able to pay off their school debt quickly and Mrs. Kronstadt says, “They are liars!”

Not many students that attend these colleges are offered financial aid, according to the National Conference of State Legislatures website which said,  “Budget bills in the 2011 and 2012 sessions revising the Cal-Grant program, California’s student financial aid program, have had a large impact on for-profit institutions. Similar to the federal gainful employment regulations, California began tying eligibility for its Cal-Grant program to student loan default and graduation rates.  Colleges must have a graduation rate of at least 30 percent and a maximum loan default rate of 15.5 percent.  The new regulations do not specifically name for-profit institutions, but apply to both public and private institutions that have more than 40 percent of their students taking out federal loans (effectively exempting California community colleges).  When the regulations take effect, nearly 80 percent of for-profit colleges will no longer be eligible to receive Cal-Grant funds.”

With so many students going to Mrs. Kronstadt for college help, it is no doubt that she will run into a couple students who want help applying for these for-profit colleges. When she does find some, she says, “I want to cry.”.  She tries to convince them to not apply to these schools and sometimes find that their parents –  being the good parents that they are-  encourage their children to apply to the schools of their choice because they don’t know the consequences of applying to these colleges.

A word of advice for students, especially seniors, looking to where to go to college: beware of for-profit schools and measure out the pros and cons of where you are contemplating applying to.