All Patriots Must Stand Up Against Bullying! 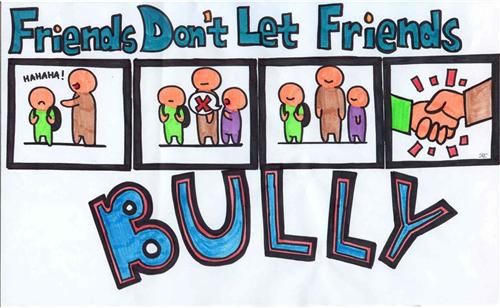 We’ve all witnessed, or have been in the situation once, where we’ve seen bullying in our lifetime — whether it was on television or in a real life scenario, bullying is no joke. It should never be taken lightly. It’s a fact that 1 out of 4 high school students have experienced bullying? This statistic shouldn’t even exist as bullying shouldn’t be a practice in schools or any other social setting. People see bullying as just a little fun but it may actually affect some of the victims in the following ways: grades, self-esteem, health (mental and physical) and even their life and future happiness.

Bullying has evolved into many subcategories that can all have the same affects on someone. There is physical bullying where harassment is occurring with physical and verbal attacks — they do not always have to be just punches or fighting — or even just putting your foot in front of someone in order to make them trip and fall is considered physical bullying. Social bullying is most common at school and even at work where instead of hurting someone physically, one spreads lies, rumors and even talk behind someone’s back in order to inflict ‘damage’ mentally and emotionally. Lastly, Cyber-bullying has become increasingly used with the new generation of teens and even children with access to the internet. The internet has now become a weapon to hurt anyone with access to social medias such as Instagram, Facebook and Twitter. Cyber-bullying involves posting embarrassing pictures, videos or comments about someone.

Many overlook bullying as a one time occurrence, but it will keep on happening to someone if there are no voices to yell, “Stop!” If you or someone — even if you do not know them — is being bullying and you feel that it is safe getting involved, try to step in and help; you would want to have someone step in and help if you were in that situation, right? If the situation is dangerous, try to look for any sort of authoritative figure or any adult near you to come and help. The same is available for cyber bullying. If you know who is harassing you or receive something that is material of a bullying nature, don’t pass it on or keep the wheel turning because that makes you as involved as the people who started it.

Other ways to stop or reduce the amount of bullying at your school or community include trying to form a club or bringing up the topic at your school, or trying to initiate a set of assemblies to help inform others of what they could be overlooking.

Just remember that there are solutions as well as people who will listen to you and guide you through such a situation as bullying. No matter what way or form it comes in, bullying is bullying and no one should ever be afraid of going to school nor ever be a victim of such a thing. Everyone should do their part to help one another and keep their campuses and communities safe!