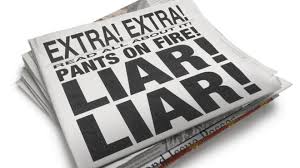 In today’s world we have become accustomed to bias mainstream news, though nowadays mainstream news in general has become flawed. Bias is when there is a prejudice in favor of something or against it. Many mainstream new outlets usually tend to sway in favor of one side, and rather than saying/telling both sides they lie, and make up things for the “opposition”. This type of news is known as fake news. Fake news has been growing increasingly popular. The disturbing part of it all is that most people believe the fake news and some act upon it.

For instance, a man named Mr. Welch had read in a “news” article that a local pizzeria was allegedly harboring young children as sex slaves as part of a child-abuse ring led by Hillary Clinton. The article that was making those allegations were circulating around the web, even appearing on sites including Facebook and Twitter. Mr. Welch is a father of two, so when he had heard about this atrocity, he thought it was true and he had to act upon it. After Mr. Welch arrived at the pizzeria, the police said, he fired from an assault-like AR-15 rifle. After he fired that shot, he was immediately arrested. The police had found a rifle and a handgun in the pizzeria. Thankfully, no one was hurt. Mr.Welch thought he was doing a good deed for the community. Due to fake news, people have been mislead and have done extreme things because of it.

The shooting shows the stubborn lasting power of fake news and how hard it is to extinguish these false news stories, poisoning the real and true news. Debunking false news articles can sometimes stoke the outrage of the believers who do believe these news articles. Social media companies try to control the spread of these stories (with limited success) and shutting down one online discussion simply pushes the fake news creators to move to another space online.

In a study that was done, it has been proven that most Americans believe that they can differentiate the difference between fake news and real news. Thirty-nine percent are “very confident” they can recognize news that is fabricated. An additional 45% feel “somewhat confident.” As a Pew Research Center poll noted, “Americans overall seem to be pretty comfortable that they can navigate this information environment, this hall of mirrors, if you will.”

Buzzfeed News found that 75% of Americans recognized a fake news story from the election still viewed the story as accurate. Respondents were shown six headlines three false and three true. If they recalled seeing the story before, they were asked if the headline was accurate. Respondents believed the fake headlines were “somewhat” or “very” accurate 75% of the time. One made-up story was “Donald Trump Sent His Own Plane to Transport 200 Stranded Marines” and had been viewed as accurate by 84% of respondents.

The worse part is the uprising of it. This may not be last time that social media will confuse its audience. The tragic story of the man shooting into the pizza parlor is just one of the examples of how inaccurate news is causing people to have anger and rage. This unethical way of presenting fake news is causing families to have to bury their loved ones.

The way people view the media has rapidly changed, not only the way we perceive it, but also how it’s been spread out. Hopefully the message of integrity and truth does not get lost.